In our culture, youth is worshipped. Aging means decline, cognitive and physical decline, something we don’t like. Something that is a source of frustration to us younger ones, like when we find ourselves in line behind such an elder at the grocery. They take so long to put their items on the belt, they take so long to dig for their coupons that they want to use, they take so long to dig out their money or credit card, then they have to figure out how to put the card the right way into the card reader, then they are so slow to put the card back into their wallet; all the while our clock is ticking, and our impatience and frustration is increasing because we still have so many “real and important” things to do. We are doing, and they are past their prime. This is just one example of how we are  seemingly “negatively impacted” by our elders. I’m sure you know many more such situations, so I spare telling more examples.

We are more likely to imagine colorful histories into people of different color, race, culture, etc, than we imagine into people of old age.  So we are quick to be impatient and frustrated with our frail elders, rather than imagine their lives when they were young, and respect their age and state of ability. This might actually be doing more harm than good to our collective culture. But I’m not going into this topic today.

Today, I’m curious – What else are they, other than old? 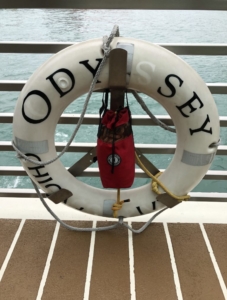 Last week, after a morning of educational lessons for our team, Teri treated all of us to a lunch cruise on the “Odyssey”! Sweet, isn’t it?! Waiting downtown Chicago by the river to go onto the “Odyssey”, we were happy and excited, already enjoying our treat before we even took our first bite of a delicious meal while watching the beautiful architecture of Chicago passing by us. Did I mention, the weather was perfect, too! Oh yes, it was a glorious day! I looked around and saw this group of four women next to us, waiting for the boat like we did. One of them was an elderly lady sitting in a wheelchair. As Patient Advocates, we always see the elderly, as a matter of fact, we are drawn to them; they are special to us, and we know their struggles.

This lady was petit and a bit frail, white hair, friendly face, dressed in a pretty long sleeved bloused and pants, curiously looking around her. With her were three women, at least one probably being her daughter. They clearly were enjoying their time also, engaging with each other in happy chatter and smiling. We made eye contact and smiled at each other. And as it happens on a beautiful day in Chicago, by the river no less, the smile turned into a “Hello, what a gorgeous day to go on a cruise” … and unbeknownst to us at this point, we met a woman who is one of the last of her generation; with a life journey so unique and heavy, and which will soon be only be told in history books, movies/documentaries, and museums.

Two of the three younger ladies, were indeed daughters, the third was one of the daughter’s partner. They shared, that their mother celebrated her 99th birthday that day!! And for the past few years, they have always taken their mother on a boat cruise, because she loves boats. So here they were again, going on yet another boat cruise, together! The mom was smiling. Then, the daughters, who had detected my German accent, shared with me that their mother was German and encouraged me to speak German with her. I loved to follow their invitation. In a short conversation, the mom told me in perfect German that she was born in Berlin in 1921; moved to England, when she was young; was a nurse in England during the war; and moved to America, to Chicago, in 1945. All along she smiled, this beautiful white haired petit old lady, making me feel delighted in our connection to Germany. My team mates were also delighted to meet this fellow nurse, and there was this instant connection that you share with someone who shares your passion for being in service of others.

When the time came to board the boat, we let the birthday girl and her guests go ahead of us as it befits the celebration. And yes, it slowed us down getting on board. But did it? It felt so right and sweet. Once aboard, we parted with smiles and wishes for a great time; the birthday group settled at their table and we at ours.

Towards the end of the cruise, I caught up with the birthday group again. I felt the urge to say “Happy Birthday” one more time and send them off with well wishes.  After all, they had been so nice and I felt this connection with them. And then there was this one question that had intrigued my curiosity for about the last hour or so, when it had started to dawn on me, that there was more to the birthday girl’s story than the pieces of information I had gathered earlier. So I asked the daughters: “Is your mother Jewish?” The daughters said “Yes” and went on to generously and kindly share a story of their mother that humbled me, all of us, deeply. The story they told uncovered a life journey, a history of their mother that is far different from the frail person in the wheelchair that meets the eye of the casual passerby.

Their mother was born and raised in Berlin, as she had shared with me already. After Kristallnacht, their mother and her young siblings were put on a Kindertransport (organized rescue effort) to England. Almost all of their mother’s family and extended family, who remained in Germany, perished in the Holocaust, except for her father, and a couple more relatives. Her father survived because he was an electrician, and his skill made him valuable in the concentration camp. Their mother became a nurse in England, where she nurtured the wounded and helped save lives. During most of those years in England, she had no contact, no information about her family left behind in Germany. When the war was over, she was fortunate to be able to be reunited with her father and remaining surviving family members. They immigrated to the United States, to Chicago. Here her father pursued and succeeded in his career as an electrician. The family remained tight knit, supporting one another in the years to come.

As I listened to the story, silently, I saw this frail person emerge as a strong survivor. She wasn’t just frail and soft spoken with white hair and a beautiful smile, she had endured and persevered horrific experiences, losses and grief; and without a doubt still carries that burden in her; and she lived to have and raise a family of her own, and find some peace again. That is what we witnessed at the river front – the love and joy between the mother and her daughters, the tender care-taking of the daughters towards their mother. We knew nothing of the horrific loss and grief, and tremendous strength this frail elderly lady had to suffer when we met her here, at the river front, on her 99th birthday, smiling, looking pretty, with her daughters by her side! Who would see this “life journey” just by looking at her, this elderly lady in a wheelchair? Who would imagine this history? What a precious and humbling gift to us to have met her and learned her history!

And how intriguing the fact that our boat was named “Odyssey”, and this elderly lady’s life has been an Odyssey; a life’s journey that was filled with obstacles, tribulations and trials, persevering in finding a way to arrive home again. Maybe this chance meeting was meant to happen, so we could use this gift of her story as a means to raise awareness that our seniors are not just old, but have lived lives that their old frail bodies and impaired cognitive abilities don’t reflect. And to meet them with curiosity and respect for their life story we don’t know. After all, we are Advocates!

Now, this story is very unique … to say the least, and with the utmost respect. And most likely, you will not come across many elderly, if any, having lived through this dark history much longer. You are more likely to come across a situation like the following, which one of our Advocates witnessed.

Where an elderly couple is in a retail store, both dressed very nicely, carrying themselves nicely, the gentleman being quite dapper in a suit and bow tie. Then all of a sudden, the elder gentleman starts to yell out loud profanities, and throwing his arms around him, while the wife stands by quietly. Everybody is staring at him and his wife in shock and with judgment. And then the wife desperately cries out: “This is not my husband. This is not the man I married. This is what’s left from what dementia has stolen from me”. When our Advocate reached out to the wife in support, she learned, that the “mad” husband used to be a successful lawyer, that he was always gentle and treated everyone fairly. But then dementia set in and slowly stole his cultured personality form him, and her husband from her.

Yes, dementia can do this! Not everybody knows of this relationship between dementia and behavior, so when we witness an elderly person behaving like the dapper gentlemen did, or even just half way out of control,  we all too often come to the wrong conclusion – that they are rude and disrespectful seniors. And stereotypes are being formed.

So please, when you are out and about next time, and you see an elderly person moving slowly or behaving oddly, don’t just see a person of old age, who is past their prime, but try to imagine their history, who they are other than old, who they may have been when they were young.

And stay tuned. In the next couple of blogs, we will explore the issue of age a bit more.

On another note we at NShore Patient Advocates would like to share some of our latest news with you… The Patient Advocacy Symposium is back but bigger, better, and brighter than ever before! It has evolved into the International Conference on Patient Advocacy (ICOPA), and will be held right here in Northfield, IL on October 3rd-5th, 2019! We hope you will join us! Please see below for a link with more information: https://icopaconference.com